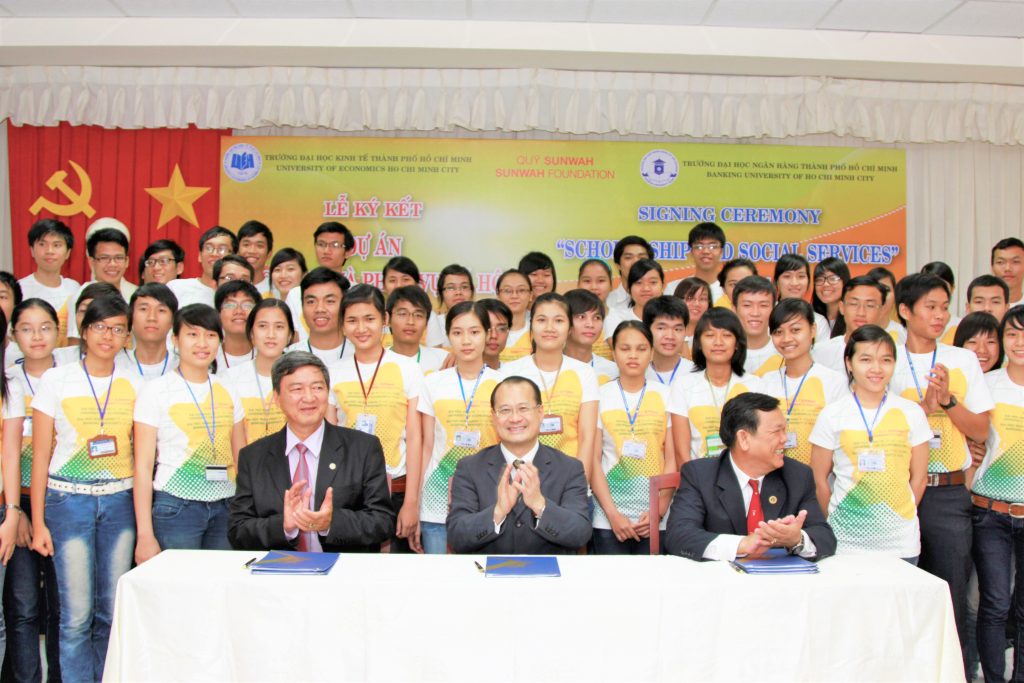 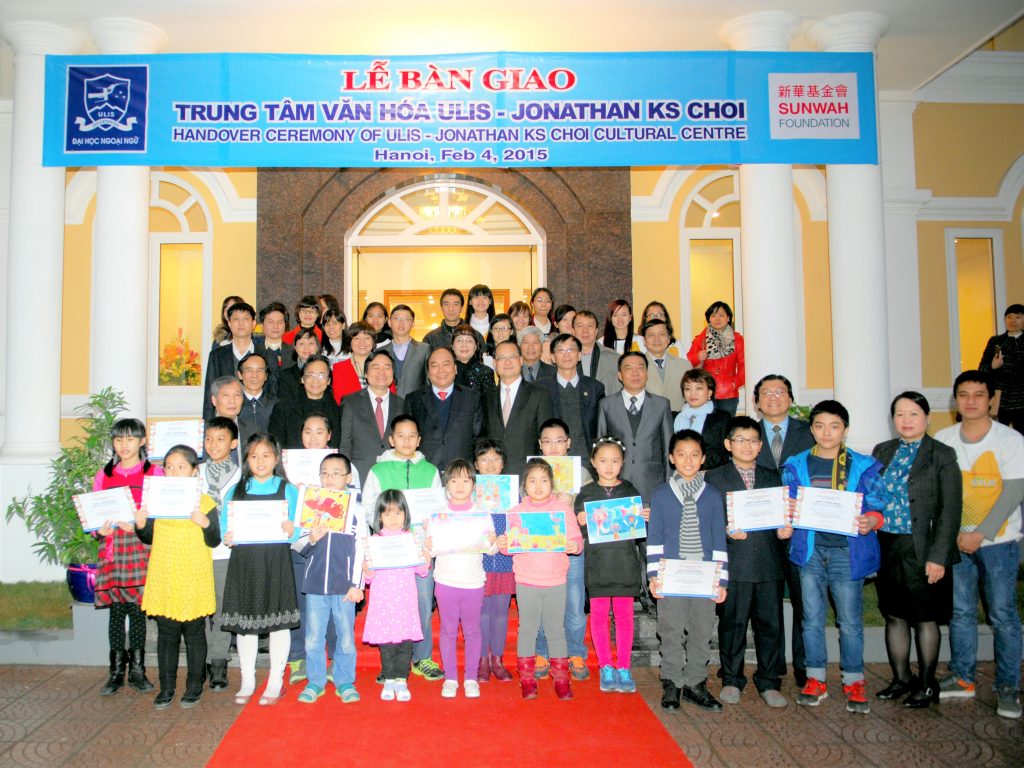 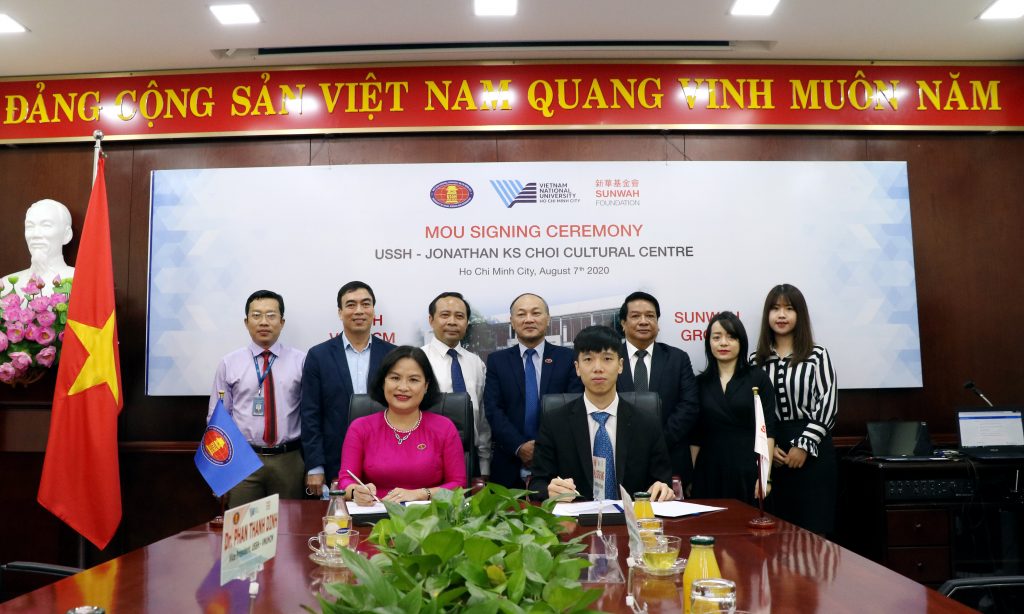 Sunwah Foundation and Jonathan KS Choi Foundation have been running social services, educational, arts and cultural programs in Vietnam for many years. Their works are greatly praised by the Vietnamese government, universities and people.

In 2008, the two Foundations made a USD 1 million donation to launch a five-year plan on a series of educational projects in Vietnam, including scholarships for Vietnamese students to study in China, training programs for teachers in remote areas, constructions and renovations of schools in rural areas, and scholarships for disabled children.

In April 2009, the two Foundations and the Ministry of Culture, Sports and Tourism co-organized in Hong Kong an exhibition on “Contemporary Art of Vietnam”, featuring 40 pieces of paintings.

In 2010, the two Foundations made its second donation of USD 1 million for projects on education, art and culture in Vietnam and held 2 large art exhibitions in Hanoi and Ho Chi Minh City.

In 2011, the two Foundations provided scholarships to 60 students from remote areas to study in Ho Chi Minh City, taking into consideration the development of students’ leadership skills and social responsibility; set up the “ULIS – SUNWAH Chinese Teaching and Research Centre” to promote Chinese teaching and research.

In 2013, the two Foundations organized “Sunwah and Friends Social Services Day” in Saigon Pearl, Ho Chi Minh City to raise awareness of the benefits of social service activities with the participation of over 1000 people.

In 2014, Sunwah Global Young Leaders Network (Sunwah GYLN) was launched to provide a platform for students from various countries and regions to promote understanding and enhance leadership skill through various social services and culture exchange projects. The Foundations also sponsored to organize Chinese language training classes for officials from the Ministry of Industry and Trade and the Ministry of Foreign Affairs.

In early 2015, the ULIS – Jonathan KS Choi Cultural Centre built by Sunwah Foundation has started its operation and will be linked with other Cultural Centres in various countries to promote understanding, appreciation and respect for the unique culture of each country to generate goodwill, paving the way to a harmonious world.

Throughout 2015, the two Foundations have been organizing and supporting various projects for the 45th Anniversary celebration, including the Sunwah and Friends Social Services and Creativity Day in Ho Chi Minh City; training by international experts for 130 social workers from across Vietnam, and organizing a Photo Contest and Exhibition entitled “SUNWAH Project 45 – The Hidden Beauty of Hanoi and Ho Chi Minh City” and Sunwah – VNU Social Services Day in Hanoi.

The Centre is situated at USSH’s main campus in the central district of the City. The new Cultural Centre will be connected with Cultural Centre in Hanoi and other countries to facilitate exchanges as well as be linked to Sunwah Innovation Center in Ho Chi Minh City to establish a platform for young leaders to connect, incubate innovative initiatives and expand their networks.

The “50 Student Environmental Ambassadors in Vietnam” project will be held in November 2020 as poart of the celebration. The 50 environmental ambassadors, who all are Sunwah GYLN members, will be selected from universities across Vietnam to gather and train together on creating projects to alert the public on environmental issues in Vietnam. After the training, the students will launch their environmental projects in their universities.

A three-day International Film Forum Hanoi which scheduled to be held in 2021, is not only an event to celebrate Sunwah’s 50th Anniversary in Vietnam but also a precious opportunity to expand the “Sunwah Youth Innovation and Entrepreneurship Alliance in Film and Television” to Asian countries in general and Vietnam in particular.