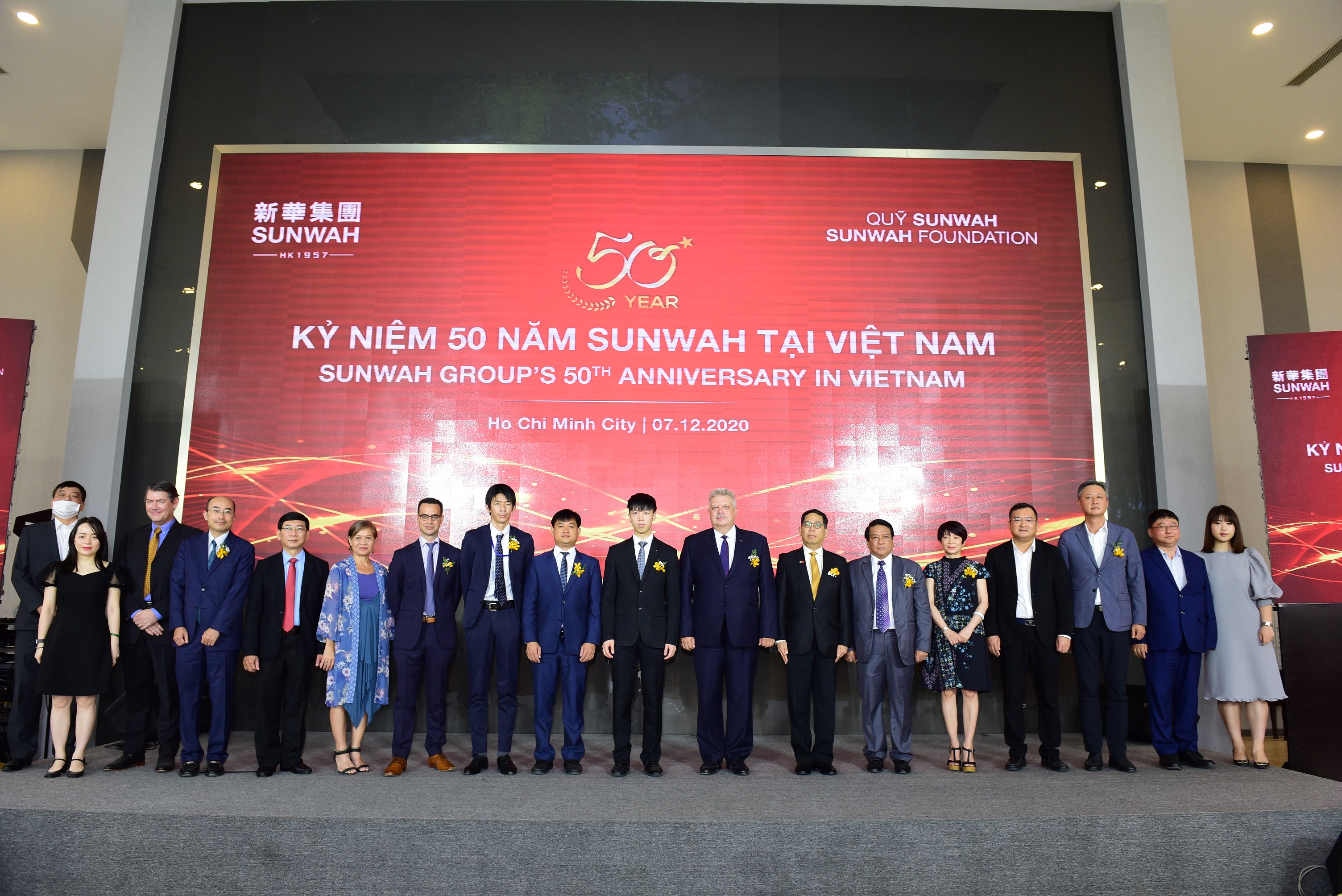 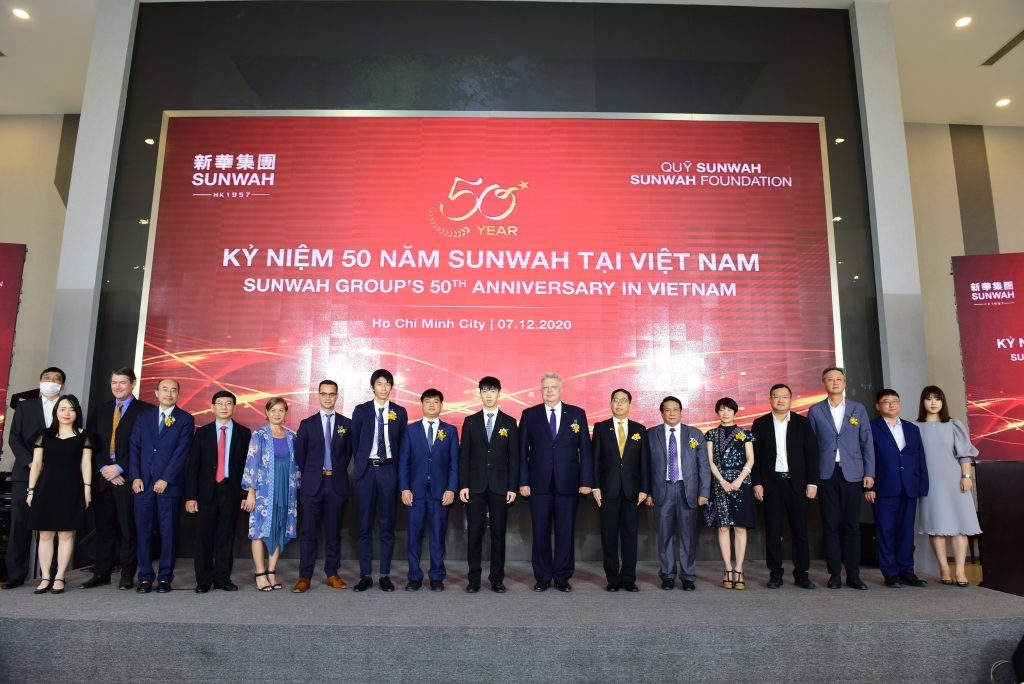 Speaking at the Opening Ceremony, Dr Jonathan Choi, Chairman of Sunwah Group and Sunwah Foundation said, “During the past 50 years, three generations of our family have made footprints in Vietnam, from my father to me and now to my children. We all consider Vietnam as our second home. From our own experience of half a century of cooperation with Vietnam, Sunwah is confident about the future development of Vietnam for its abundance of natural resources, stability, huge economic potential, and above all, hard-working and creative labour force. I firmly believe that prompted by my father’s early commitment to Vietnam, we will continue to contribute as much as we can to its development and celebrate many more 50th anniversaries in the generations to come.” 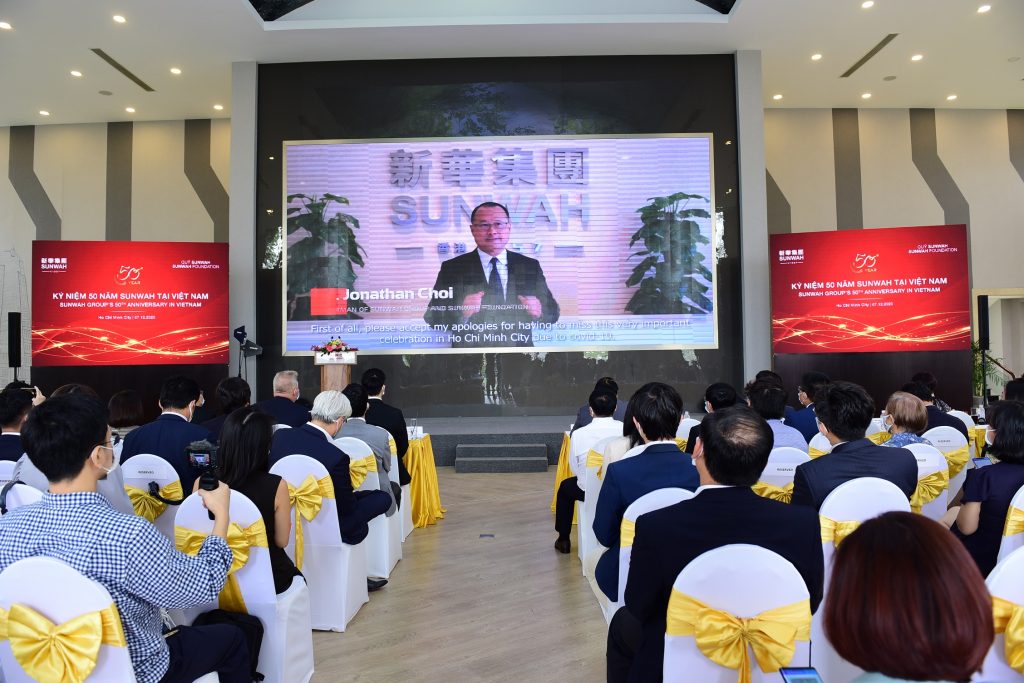 To celebrate Sunwah Group’s 50th Anniversary in Vietnam, the Group has started to launch a series of events to contribute Sunwah’s international networks in Innovation, Culture, Environmental Protection and Film to respective sectors in Vietnam.

Mr Dang Minh Khoi, Deputy Minister of Foreign Affairs of Vietnam, expressed great appreciation towards Sunwah’s significant contributions to the socio-economic development of Vietnam over the past 50 years. He said, “Sunwah Group’s success in Vietnam today, is not only the success of the Group but also the success of the whole country of Vietnam, of the Open Door Policy of Vietnam. On this occasion, I would like to thank Dr Jonathan Choi and Sunwah Group, for not only focusing on your business areas but also contributing to the culture, education, and charity activities in Vietnam over the years. This year, when Vietnam and all countries are severely affected by the Covid-19 pandemic, Sunwah has always accompanied the country and people of Vietnam in the fight against the pandemic with very specific and practical activities, including a donation to the Vietnam Fatherland Front as well as to the local provinces of Vietnam. Sunwah Group’s dedication to Vietnam over the past 50 years has always been highly praised by the Communist Party, the State and the Government of Vietnam. Dr Jonathan Choi has personally received many notable awards from the Vietnamese Government including the Vietnam Friendship Order.”

Mr Wu Jun, Consul General of China in HCMC, congratulated Sunwah’s 50th Anniversary and emphasized that: “During its 50 years of development, Sunwah Group has received high appreciation from the Government as well as the Vietnamese people, becoming one of the biggest Hong Kong enterprises in Vietnam. Sunwah has witnessed the remarkable economic changes brought about by Vietnam’s Open Door Policy, constantly contribute to Vietnam’s socio-economic development, and play a significant role as a bridge for the friendly cooperation relationship between China and Vietnam. Dr Jonathan Choi is Chairman of Sunwah Group and also Permanent Honorary Chairman of the Hong Kong Chinese General Chamber of Commerce. Over the years, he has made positive contributions to the prosperous development of Hong Kong and is an outstanding representative of implementation of the policy of “One country, two systems”, which gave him high reputation in both Mainland China and Hong Kong.” 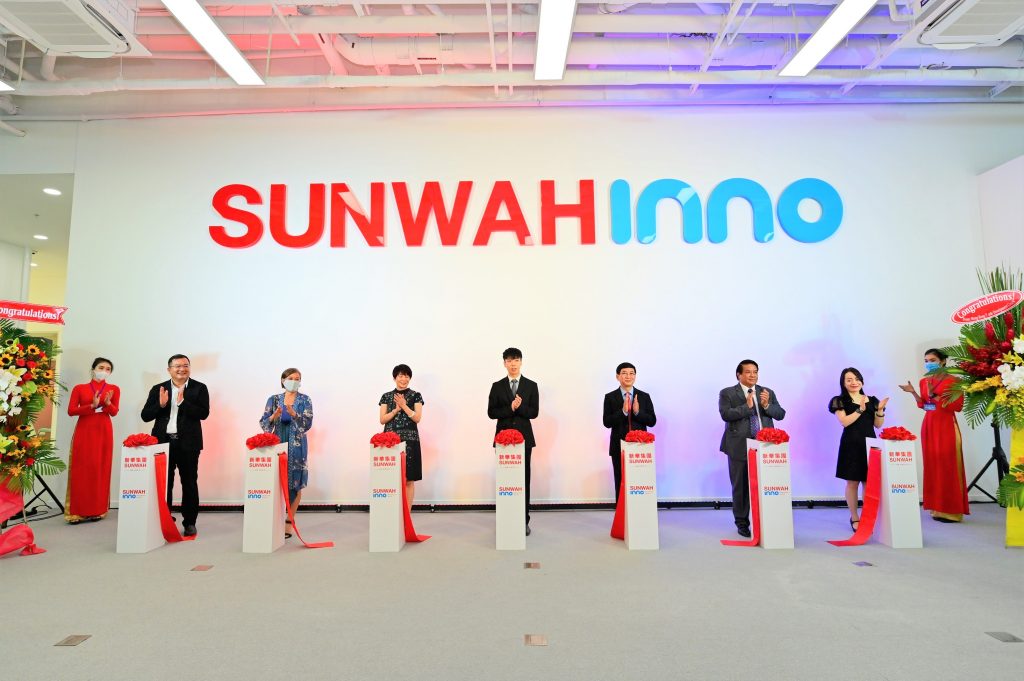 The Launch of the Sunwah International Innovation Platform (SWIIP) was also organized at the ceremony. So far, there are 20 partners, including prestigious universities, investment funds, incubators, and accelerators from Canada, China, Hong Kong, Korea, Macao, Singapore, Cambodia and Vietnam. SWIIP partners highly praised the launch of the Platform and believed that it would become a great network to promote the exchange of innovative ideas, new trends, as well as learning from each other’s business model. Mr Jesse Choi said, “Sunwah Innovations decided to establish the Sunwah International Innovation Platform to create a global network of leading universities, institutes and organizations with the aim of leveraging the unique resources, business intelligence, and capabilities of each Partner in the Platform to move towards an innovation economy together.” 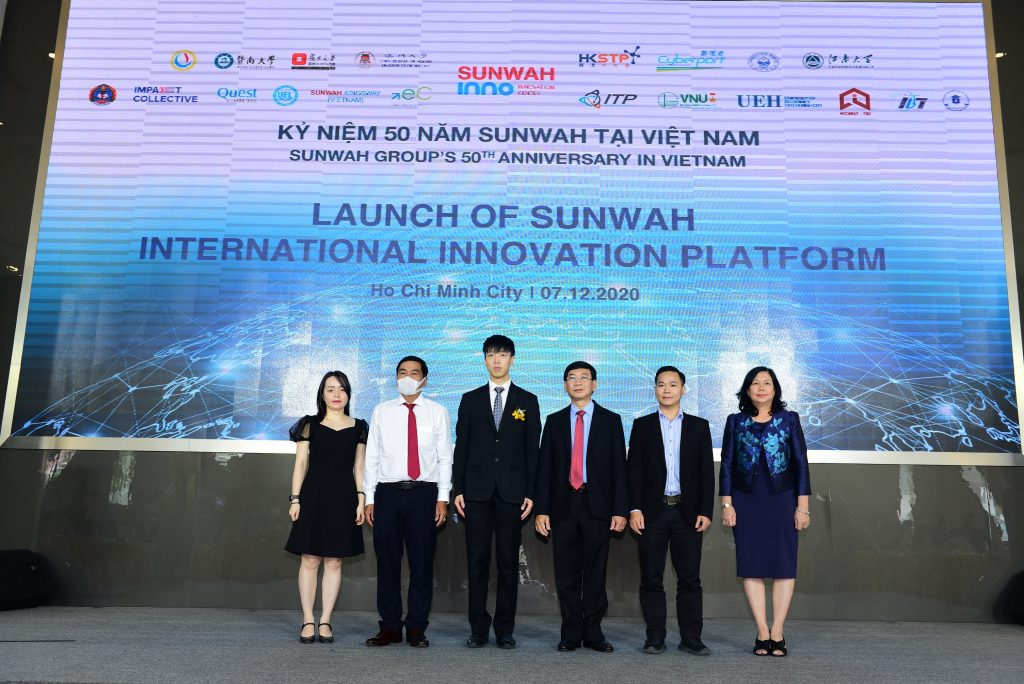 Mr Jesse Choi (third from left), and Honorary Guests at the Launch of the Sunwah International Innovation Platform 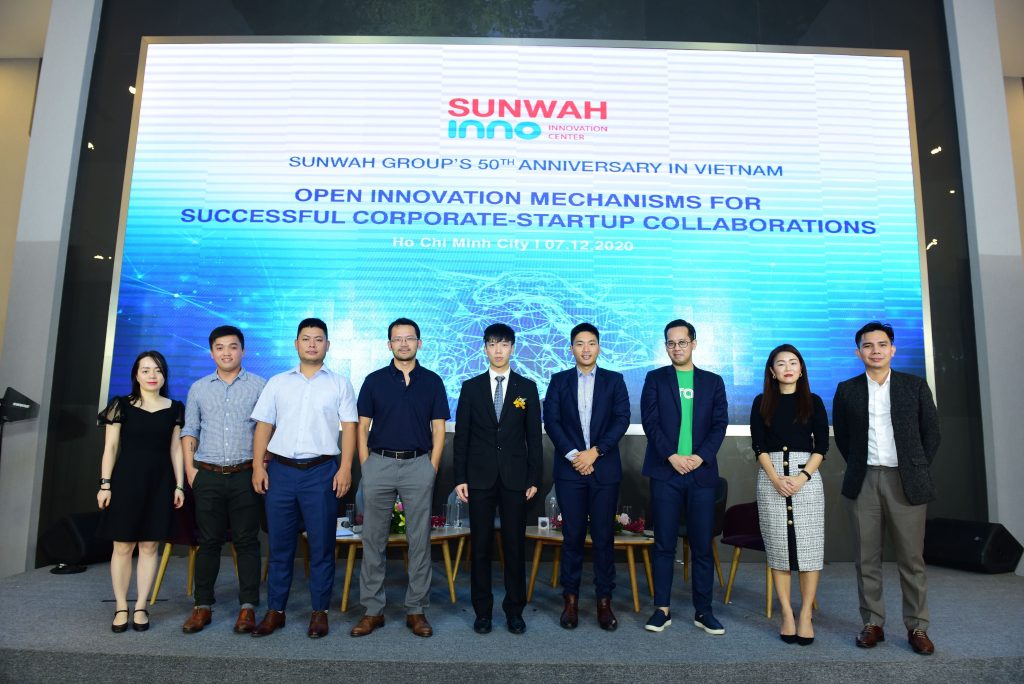 On 8 December 2020, Sunwah Group will co-organize with the Information Technology Park, Vietnam National University, Ho Chi Minh City to hold the workshop entitled “EduTech – The future of endless possibilities” in the morning. This workshop will be attended by startups, corporations and venture funds in Vietnam, sharing significant trends in the Education Technology industries.

Established in 1957 in Hong Kong, Sunwah Group is a highly diversified conglomerate based in Hong Kong with business activities in mainland China, Macao, ASEAN countries, Japan, Korea, Canada, the United States, Europe and Australia. Since 1970, the Group has started doing business in Vietnam. Sunwah’s business in Vietnam now covers Seafood and Trading, Real Estate, Financial Services, Agricultural & Dried food products, Coffee, and Innovation. Dr Jonathan Choi, Chairman of Sunwah Group, is also the Founding Chairman of the Hong Kong – Vietnam Chamber of Commerce which plays a key role in promoting economic and trade cooperation between Vietnam and other countries over the past years. Furthermore, Dr Jonathan Choi has also organized many cultural and educational exchanges through Sunwah Foundation and Jonathan KS Choi Foundation to strengthen the long-term friendship between Vietnam and other nations and regions in the world. 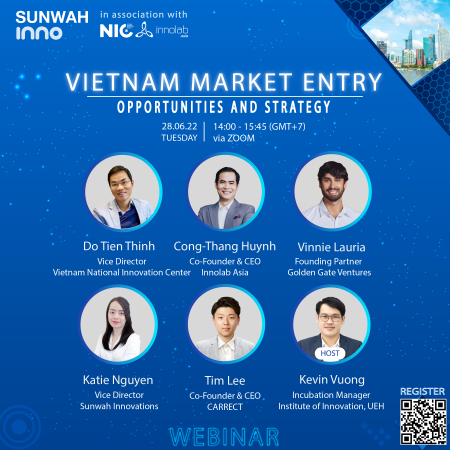 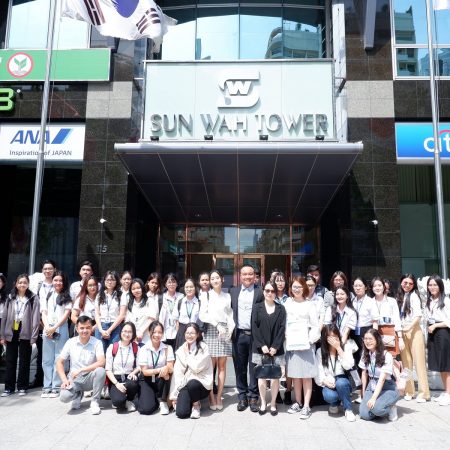